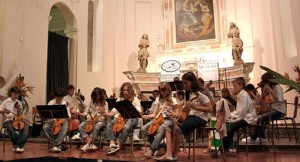 The Music review of Cervo, in its eleventh edition, proposes itself as an event for all young musicians which would like to perform and share with other people their love for musical notes.

The performances of the enrolled musicians, which will play without being in competition, will take place during the days of May 19th, 20th, 26th and 27th, 2012. In the afternoon during Saturdays and both morning and afternoon during Sundays.

The performances will take place in the Auditiorium of the Santa Caterina Oratory, in the historical district of the Ligurian village.

On Tuesday, June 5th at 9.00 PM at the Santa Caterina Oratory there will be a concert held by the Bayerisches Landeszupforchester, a Bavarian plucked instruments orchestra.