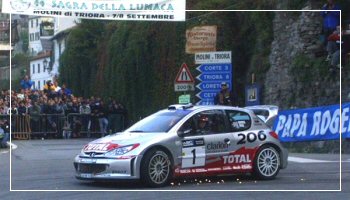 Sanremo, September 2007. The 49th Rally of Sanremo will be one of the events that are part of the Intercontinental Rally Challenge. The Rally will start on Thursday 27th in the afternoon with the first half-stage which holds four stages including the Bignone Mountain run. Friday 28th there will be the second half-stagewhich will end with the usual Rally Car parade through downtown Sanremo. Saturday 29th there will be the second stage: 136,70 miles of thrilling curves along the countryside roads of the Ligurian coast: San Romolo, Pigna, Andagna, the Ceppo Mountain, Langan…legendary places known to all the passionate Rally Car followers. For the 2007 edition there’s a special idea for the great race cars of the past: several Rally car collectors will “show off” during the days of this Racing competition along the courses of the Special Trials just to be admired and warm up the crowd.