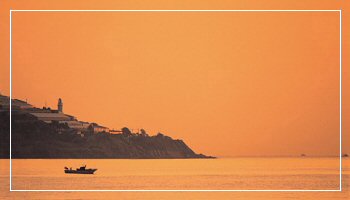 The “Riviera di Ponente” lies in a very favourable position both from the point of view of easy accessibility from the surrounding area and also from a climatic viewpoint. Liguria is blessed with a Mediterranean style climate. However, there is a further sub- division on the Ligurian Riviera which sees the Ponente benefiting from micro climatic conditions of its own.

The city of Sanremo is easily accessible by every type of transport: car, train, plane or boat. Theautostrada A10/E80, Genoa – Ventimiglia, connects the city with neighbouring France and, through Genoa, with the main Italian motorway network.
As an alternative to soak up the beauty of the coast you may wish to follow the ancient Roman road known as l’ Aurelia.

The nearest airportis that of Nice which is only 50 kms. from Sanremo, but the city is also easily reached from Genoa.

For those who intend to travel by train, which was the method by which the first tourists in the 19th century arrived in the city, there is a modern railway station, well connected to the principal European lines. Incidentally, those first tourists were said to be “drunk” on the perfume of the flowers as they arrived in Sanremo.