Sanremo in Fiore 2007 – dedicated to the magical world of comic strips. 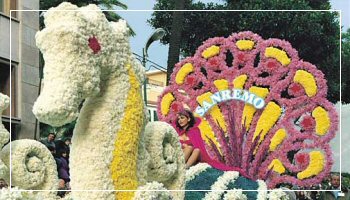 The last weekend of the week in January, from Fri. 26th to Sun. 28Th, is a triumph for the Sanremo flowers. On Sunday morning you will assist to a street parade of wagons of flowers, a wonderful display of fresh and scented flowers of the Riviera. Thirteen Councils will partecipate, each one with its wagon which will be set up the night before by volunteers and florists. The main theme for the 2007 exhibition will be the magical world of Italian comic strips. It is already known that the Sanremo wagon, not participating to the contest, will be a tribute to one of its famous children : Antonio Rubino, a great Italian comic strip maker ( and not only that ). In 2007, the route will have some new aspects compared to last year’s ; it will stretch all the way through Piazzale Carlo Dapporto, Lungomare Italo Calvino, the Vittorio Veneto gardens, via Nino Bixio, the area of Zampillo , via Roma and Piazza Cesare Battisti.

It was set up to host up to 8000 people, coming from all over Italy and Europe. The site will also offer a bus and car parking space around the area of the Taggia-Arma train station, the Bussana flower market ( cars only ), and the area of Pian di Poma in Sanremo. From here, there will be a few mini buses to the centre of Sanremo.

Apart from the main event on Sun. 28Th, there will also be a few parallel events about the Sanremo In Fiore: an exhibition and book presentation about the Italian comic stips will take place in the former train station depot. Right in the town centre ,there could also be a transfer of the “Festival dei Fiori”, a great event about the art of flowery composition : from the market of Valle Armea to the new exhibition halls of the Palafiori of Corso Garibaldi. The Sanremo Casino and its Literature Tuesdays will dedicate an event to the “Sanremo in Fiore”. 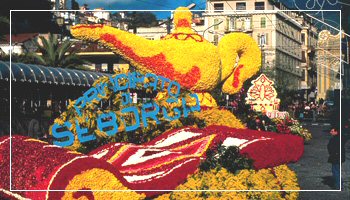