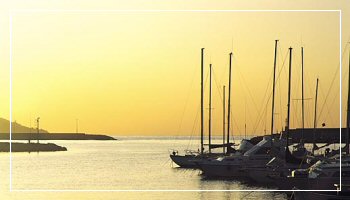 Piazza Bresca, situated near the Porto Vecchio, is the seafaring heart of San Remo. From the foot-square begins a pleasant itinerary – a half-hour walk by the fort of Santa Tecla and along the promenade “Delle Nazioni”.

The Square takes its name from a prominent family headed by captain Benedetto Bresca who became famous for historical happenings in the 1500’s.

Today there are orange and palm trees in this square, and where there were once inns now is to be found the small church Chiesa della Marina. At the crossroad between Via Gaudio and Via Bixio a memorial tablet reminds that in this house “Giuseppe Garibaldi on September 22, 1848, encouraged the common people to keep their faith in the future of Italy.” Crossing the railway tracks you will get to Porto Vecchio. The seafaring life of San Remo dates back in the dawn of its history. A Provençal saying explains that “li gens de San Remu navigou san remu”, meaning these people can sail without oars.

From the Middle Ages to the 1800’s the economic life of San Remo was concentrated in the harbour; for example, the plant cuttings of all the citrus fruit trees grown on the surrounding hills were transported by sea.

In 1435 the harbour was widened, and in 1660 the authority in charge of San Remo asked the Senate in Genoa to enlarge the harbour. By the 1700’s four thousand people were working in the harbour of San Remo, and some 120 ships and 100 boats found anchorage.

Then, the Genoese silted up the harbour and a period of crisis began: by the end of 1800’s the steamships and trains marked the decline of the harbour of San Remo.

Nowadays, the harbour of San Remo is named
Porto Vecchioto distinguish it from the modern one: Portosole, which covers an area of 83,000 sq. m., and docks more than 450 boats and 50 fishing-boats.

The fort of Santa Tecla overlooks the harbour: it was built in the middle of the 1700’s by the Genoese to keep an eye on the activities of the people of San Remo. It is one of the best examples of Ligurian military architecture of the 1700’s and up to some years ago the prison was situated there.