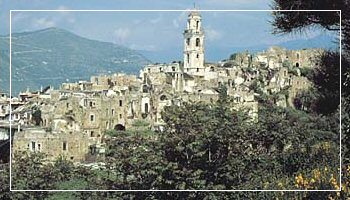 It all started at dawn on Ash Wednesday in 1887, when the tremors of a violent earthquake shook the hills surrounding San Remo.

Bussana, an ancient village built near the Town of Flowers, was completely destroyed by the shock. The houses of Bussana Vecchia, which had been built around a castle, were severely damaged. Many of them crumbled, while others were irreparably damaged. Its surviving inhabitants lived for some time in makeshift dwelling places, but then they decided to leave the village – in part due to the fact that access to the village had become impossible. As years went by, the ruins were covered by a thick vegetation which hid the damage of the earthquake. Bussana remained a ghost town until the 1960s when a Piedmontese artist, Clizia, settled here and established an international community of artists right in Bussana.

Soon Bussana came alive again: craftsmen and artists coming from Italy and Europe started to restore its houses and streets, while respecting its original medieval structure featuring narrow and winding alleys and houses built with stones and bricks. In fact they used the very same tiles, stones, and bricks that were found among the ruins of the village. The large windows of its workshops and houses are the fruits of the restorers’ originality: when the cracks were to big to be fixed, they simply inserted a sheet of glass.

Nowadays Bussana Vecchia is a very unique village. Here you can find every type of craftsmen’s and artists’ workshops, ranging from goldsmiths’ to designers’ or botanists’. The village has been literally reborn, and every year its peculiar atmosphere attracts thousands of tourists, who are eager to find out what spell lingers in the air of this Medieval village built on the hills of San Remo.