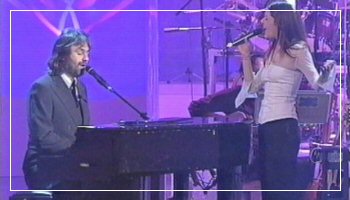 The first edition of the San Remo Song Festival was broadcast on the radio in 1951, a few years after the end of World War II. During the first year, only three singers, accompanied by an orchestra, participated in front of a live audience whose members were eating a lavish dinner throughout the performance. The following year the number of participating singers increased to five and then to ten in 1953, as the festival gradually gained prestige and was finally recognized with the introduction of television in 1955. The following years were considered a time of the great Italian singers and songwriters, such as Nilla Pizza, Teddy Reno, Claudio Villa, and Domenico Modugno, who won the Festival in 1958 with his world-wide famous song “Nel blu dipinto di blu” (also popularly known as “Volare”).

Great Italian artists have performed on the Festival stage and their songs have marked an important moment in history. The Festival has always caused a tremendous outcry which is due in part to certain memorable episodes. For instance, several years ago Nunzio Filogamo (a famous Italian presenter) simply could not tolerate the blunders made by his colleague Marisa Allasio and he thus forbid her to participate during the final night of the Festival. On other occasions, the song lyrics were thought to be too “explicit” for the times, such as in the case of “Uno per tutte” (i.e., “One for all”) by Tony Renis and Pericoli in 1962.

Happy episodes have also been accompanied by upsetting and mysterious ones. Luigi Tenco (a famous Italian singer) committed suicide in his hotel room after learning that his song had been eliminated. This event shocked and moved people deeply and its repercussions on the Festival audience lasted for quite some time. In recent years, there have been some strange occurrences during the Festival. In 1996 a man attempted to commit suicide by jumping over the balcony in the Ariston Theatre, but the announcer managed to talk him out of it. At first causing emotion and sympathy, this entire episode turned out to be a publicity stunt and thus ended in a lawsuit. Through the years the Festival has certainly been characterised by various events, which have contributed a certain sense of  mystery and fame that has always characterizes this great music event.

Italian singers and world-wide famous artists, and their assistants: every year something new or strange has to happen so that gossips can flourish and spread through the news during the week of the Festival.

The town and the Festival have a close and deep connection, as can be seen outside the Ariston Theatre, home of the competition, where huge crowds gather awaiting the singers, as well as crowds “stalking” the area outside the hotels where the singers are housed during the Festival.

When the Festival is on, the town is filled by a peculiar atmosphere made up of flashes, colourful lights, and dreams coming true. Once preparations are over, the list of performers is ready, the stage is set, and the audience sits patiently in the hall, everything is ready for the show to begin.  As emotions rise, the announcer comes onstage and the new edition of the Festival begins.  In the words of one of the past contestants “whatever happens, it will be a success” simply because it could not be anything else because “San Remo is San Remo”.